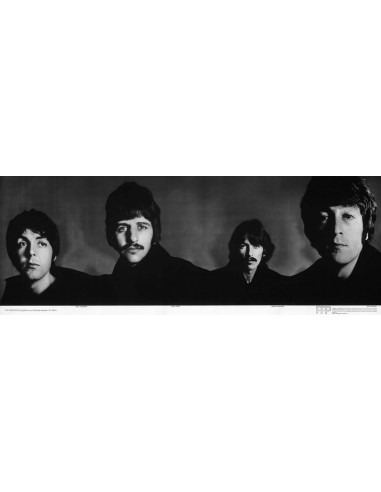 ORIGINAL 1967 Psychedelic Beatles poster set, which was created by Richard Avedon in 1967. This set was for STERN magazine and we guarantee 100% authenticity. The STERN set is sold as a complete set of 5 posters or can be sold as 4 color with or without the black and white banner included. The poster set is sold "individually" mounted on linen. They are included in POP ART shows and Museums all over the world and we have participated in both selling and loaning sets to Museums such as: Museum of Fine Arts Montreal, Museum of the Archives of The Hard Rock Cafe Orlando, Museum of the City of Musique Paris, and others. They were, and still are, an important icon of the 60's. They are in mint condition.

MORE HISTORY: Many people ask us about the history of when and where these posters were printed. In 1967 The Beatles company "Nems" contracted Richard Avedon to create the design and then gave the distribution rights to different outlets in different countries. The Publications that would handle the distribution were: in the USA "LOOK" magazine where you could order your set with a pullout tab, and send away for your set to come in the mail for $1.50. In England it was the Daily Express Newspaper that handled distribution. In Europe it was "Stern" magazine that distributed the posters and they were sold at Newstands in special presentation boxes like the one pictured below. In has recently come to my attention that there was a Japanese printing as well. All 4 printings were simultaneous in 1967 and there were 4 different printers, one from each country that printed the posters for their respective Publication. The Stern and Daily Express posters were similar in size measuring approx 19" x 27" while the Look version was slightly bigger at 22" x 31". The banner was the same size 14" x 40" in all 3 countries. We have the Stern printing and they are the 1967 printing, not a reprint, but posters we've found and locate for resale. There are no subsequent or later printings that would be considered legitimate, only the 1967 printing is considered the authentic original. The only priniting that will go up in value, is the 1st printing, anything else is not worth more than the decorative face value. Many people ask how many were printed and we have not yet discovered a figure, but one has to assume with the popularity of the Beatles at the height of their fame in 1967, and the add campaign with John Lennon on the cover of 'Look" magazine, they must have printed 10's of thousands. This is not as important as the question of, "how many have survived". People put them up on the walls with scotch tape and many just got thrown away. Who would have thought they would become an important art statement and represented in "Pop Art" museum shows and "1960's" museum shows and "Rock and Roll" museum shows. Happily we've found some and will keep searching for more. Eventually the only ones to surface will be the ones that are "resold" by private collectors, when we can find no more.

Save products on your wishlist to buy them later or share with your friends.

By pursuing your navigation on this site, you accept the use of Cookies to realize statistics of visits